Play Hard, But Don’t Break It

Almost two years ago, I visited Witch’s Rock Surf Camp here in Tamarindo, Costa Rica and saw Robert August shape a piece of foam into a surfboard; the vehicle that carried me to the sport that had recently captivated my heart and transported me to another world. The attention to detail, the care and stoke that Robert put into making the board was inspiring. Just imagine seeing a large, blank piece of foam and two hours later seeing a fine tuned machine (see below). To go behind the scenes and witness a surfboard come to life was magical. The added comic entertainment from the jokester known as Robert August makes the experience that much more special. “I shaped this board so it only will go right.” 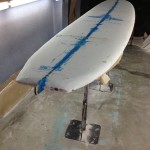 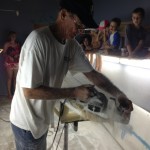 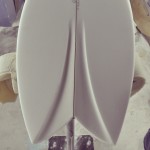 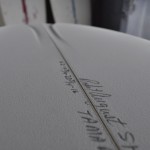 Well, since moving to Costa Rica at the end of last year to work for Señor August, I have seen quite a few boards shaped by the master. I have to admit that I usually don’t watch the whole session, but I still love popping my head in the shaping room and seeing Robert use his magic hands. Lucky me, Robert found some time in his shaping schedule and shaped my own custom board while I was traveling in the States a couple of weeks ago. Although I would have loved to witness my board come to life and help shave some foam, I have heard that seeing ones board shaped is bad luck…like seeing the bride before the wedding bad luck.

Hopefully, seeing your board before the glass job is not bad luck, because one of the first things I did when I got back to Costa Rica was go to the glass shop to check out my board. (OK, that might be a lie…I happened to take a peek at my board because I coincidentally put a nice ding in my longboard and consequently I had to drop the board off at the shop to get repaired. As Wingnut says, “Play hard, but don’t break it!”) Then, a couple days later I had my second look at my board, but this time I got my hands dirty. 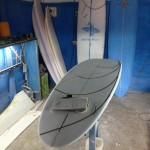 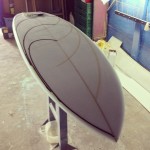 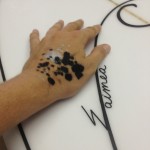 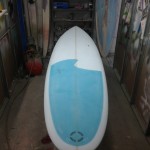 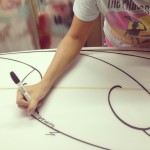 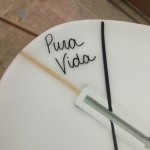 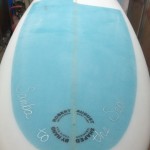 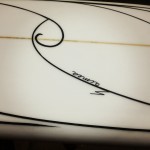 If you are going to get a custom board, might as well draw on it yourself, right? Juan Diego, the glasser and owner of Che Boards, helped me tape out my vision on my board. To say the least, my hand was shaking right before I put the marker to the foam! The design on the bottom of the board is of a breaking wave, with my “Waimea” signature and “Pura Vida” inked inside the wave, and “Samba to the Sea” scripted on the top deck. The design is simple, and I think next time I might just get a little bit more adventurous (ugh-oh Robert, you fueled the fire to an addiction to custom boards…) 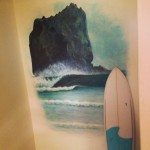 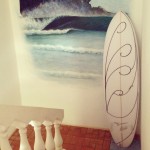 A couple days later, Juan Diego put the finishing touches on my board, and unveiled my “Waimea” board at Witch’s Rock Surf Camp. Remember waking up Christmas morning and seeing all the loot Santa had given you? Multiply that feeling by about 1,000 and you get a happy Waimea, grinning ear to ear. Well, as luck would have it, I had to wait almost a week for waves to get my new love wet…plus another day. To my dismay, my girlfriends and I woke up early for dawn patrol to find a choppy, washing machine that resembled waves at Avellanas, the beach where I wanted to christen my board. I almost paddled out, but they stopped me just as I was getting my toes wet. They said, “Do you really want to ride your board for the first time in these conditions?”
Early to bed, early to rise, we set out again the next morning for dawn patrol and found a much more agreeable, glassy ocean. Walking down the beach with my board under my arms, I found myself nervous. Paddling out, I felt like I was on a first date. “Does my board really like me? Do I like my board?” Fast forward about two minutes later, and I found my feet under board going right. “Ok, I think we like each other.” One large set wave later, it was head-over-heels puppy love, rail-grabbing and flying down the line going left. For almost two hours, I was in my own world, dancing with waves with Waimea. To top-off the magical session, I can’t even remember wiping out the whole session. My friends commented to me after our session, “Every time we looked over at you, you were catching a wave. You had a huge smile on your face the whole time.”

You know, some say your first time is just OK? Mine was amazing. Waimea rocked my world.

Thank you Robert for an amazing board.