Two weeks ago the only doggies that were on my radar were my doggy nieces and nephews, a la Maya, Pinto, Kiki, Pollo, John Adams, Niko, Lucas…the list goes on and on. Well, maybe I was secretly plotting on how to steal my neighbors adorable pit-boxer mix puppy, Vito, but when you live two doors down the robber becomes kind of obvious. “No, neighbor, I swear, this is Pete-0 not Vito!!”

So there I was, not-so-happily doing inventory when I got a message from my friend Ashley, who just so happened to be running an errand at the local vet. “This litle one is looking for a home.” 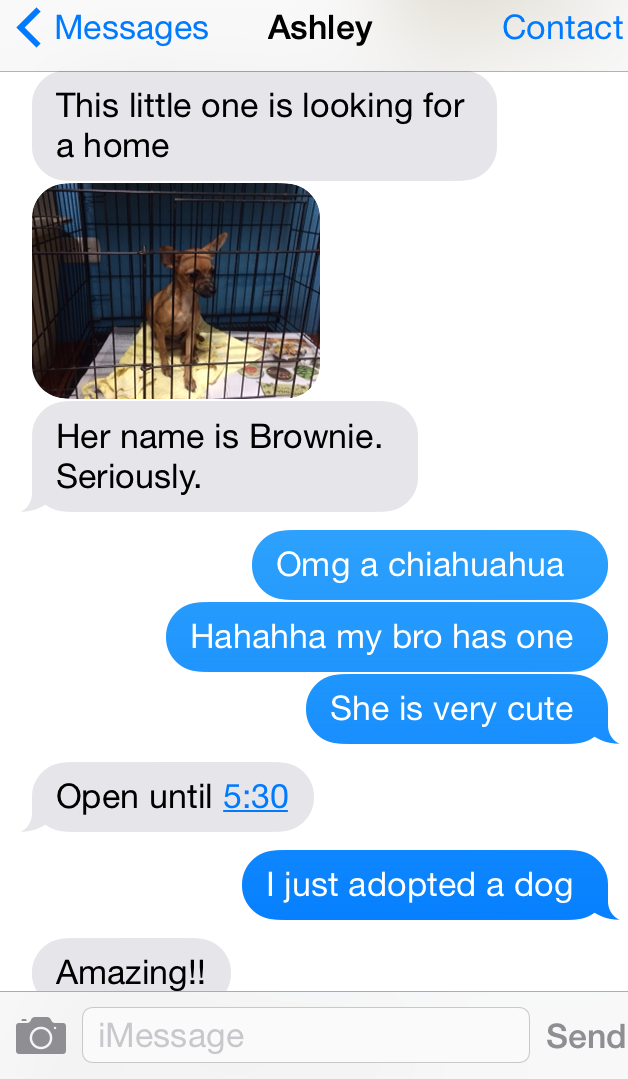 Fast forward an hour-and-a-half later and somehow Ashley and a doey-eyed Chihuahua convinced me that I needed a small dog replacement for my former dog pal, Lucas the Bichon. (Don’t worry, Lucas is doing great! He moved to Surf City, California.) I just could not stand to see this five month old Chihuahua stay in a cage, terrified out of her mind, another day. I decided to give it a try, and at the very least, provide a foster home for her. Worst came to worst, my brother’s Chihuahua Pollo could have a new girlfriend! Plus, how could I pass up not helping a dog that was named Brownie? Brownie as in MY nickname! 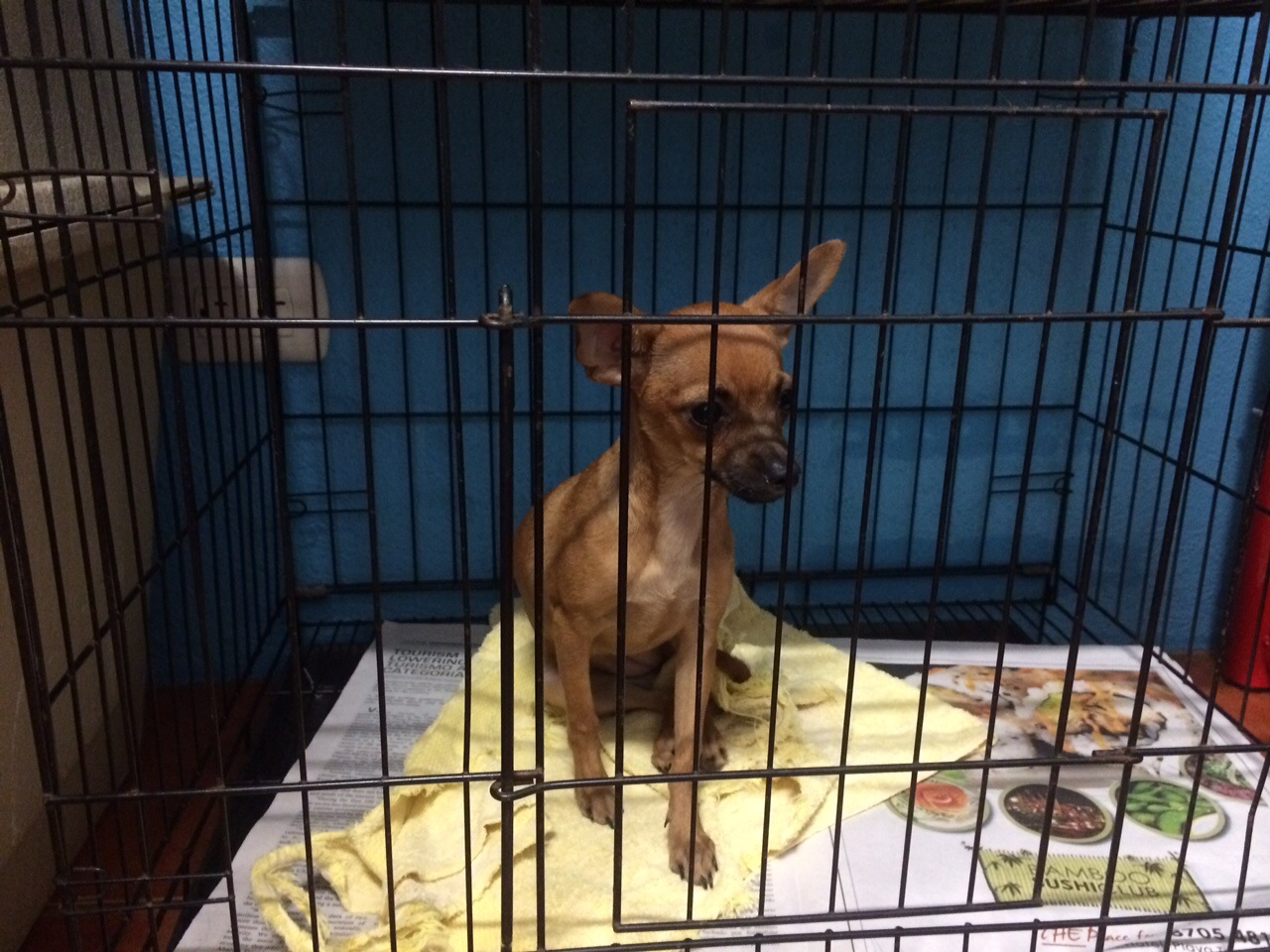 Apparently Brownie didn’t get the memo that she was on a trial basis. Although still a very scared puppy (thanks to the former family that had her), within 48 hours Brownie had adopted me. 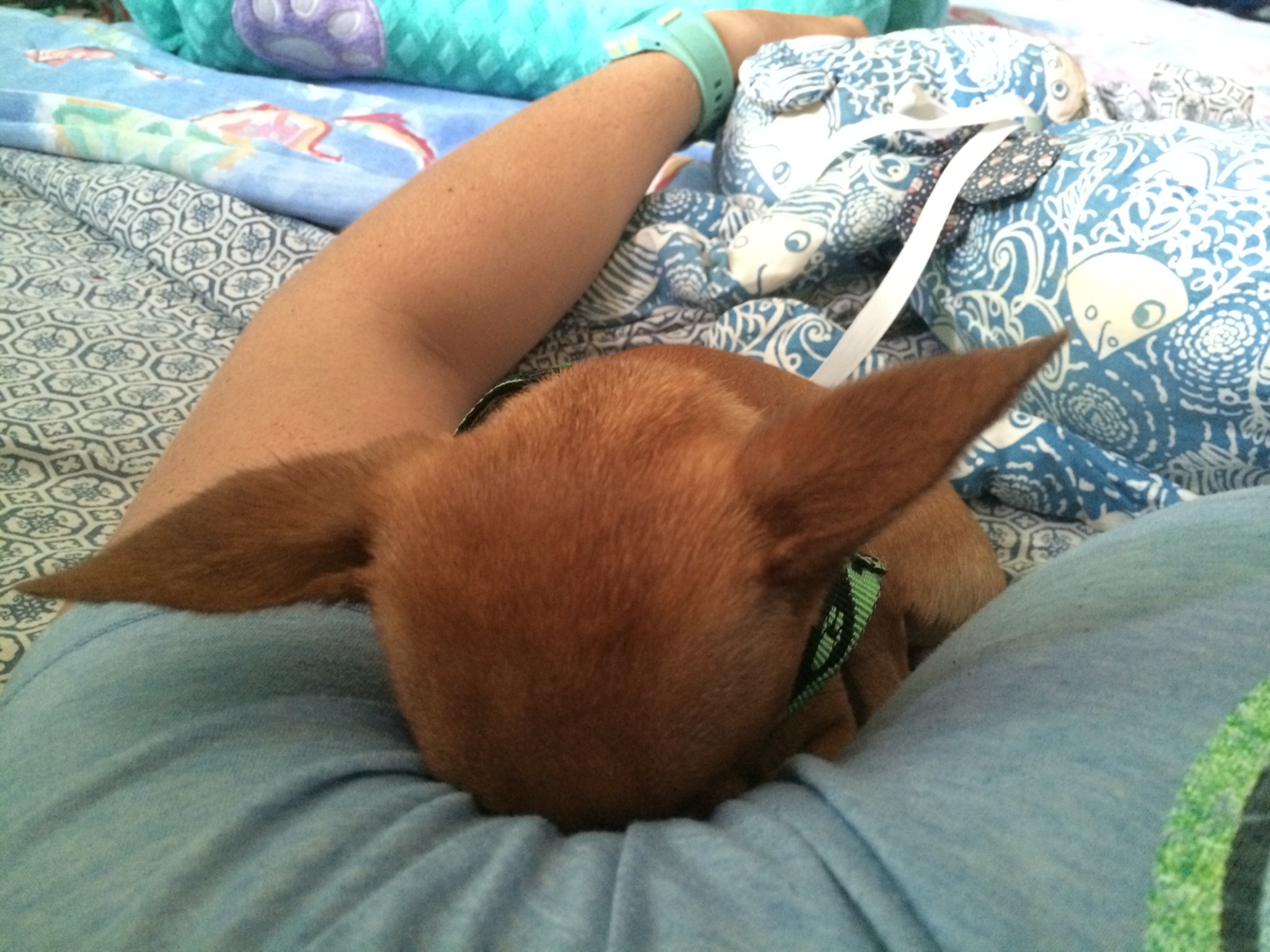 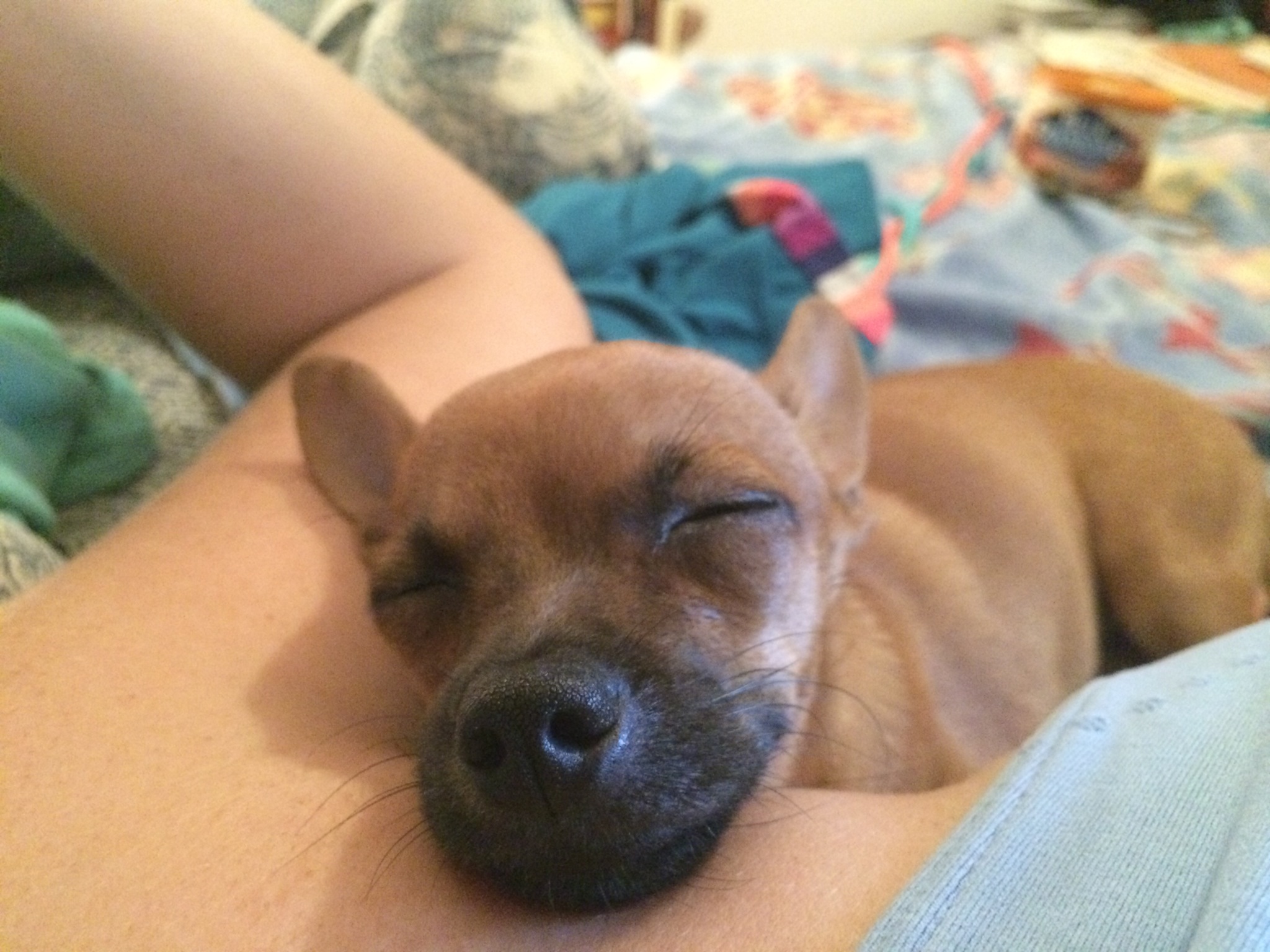 To say the least, I was an overwhelmed new dog-momma. Thank goodness that this smart girl learned to do her business outside and a big shout-out to my awesome dog-owning friends. Day-by-day this sweet puppy comes more and more out of her shell and I can’t wait to see how terrible she really is as a puppy. 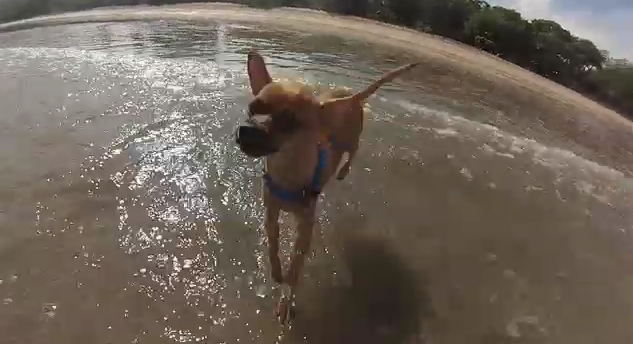 Gidget goes to the beach (for the first time). You really should click this… 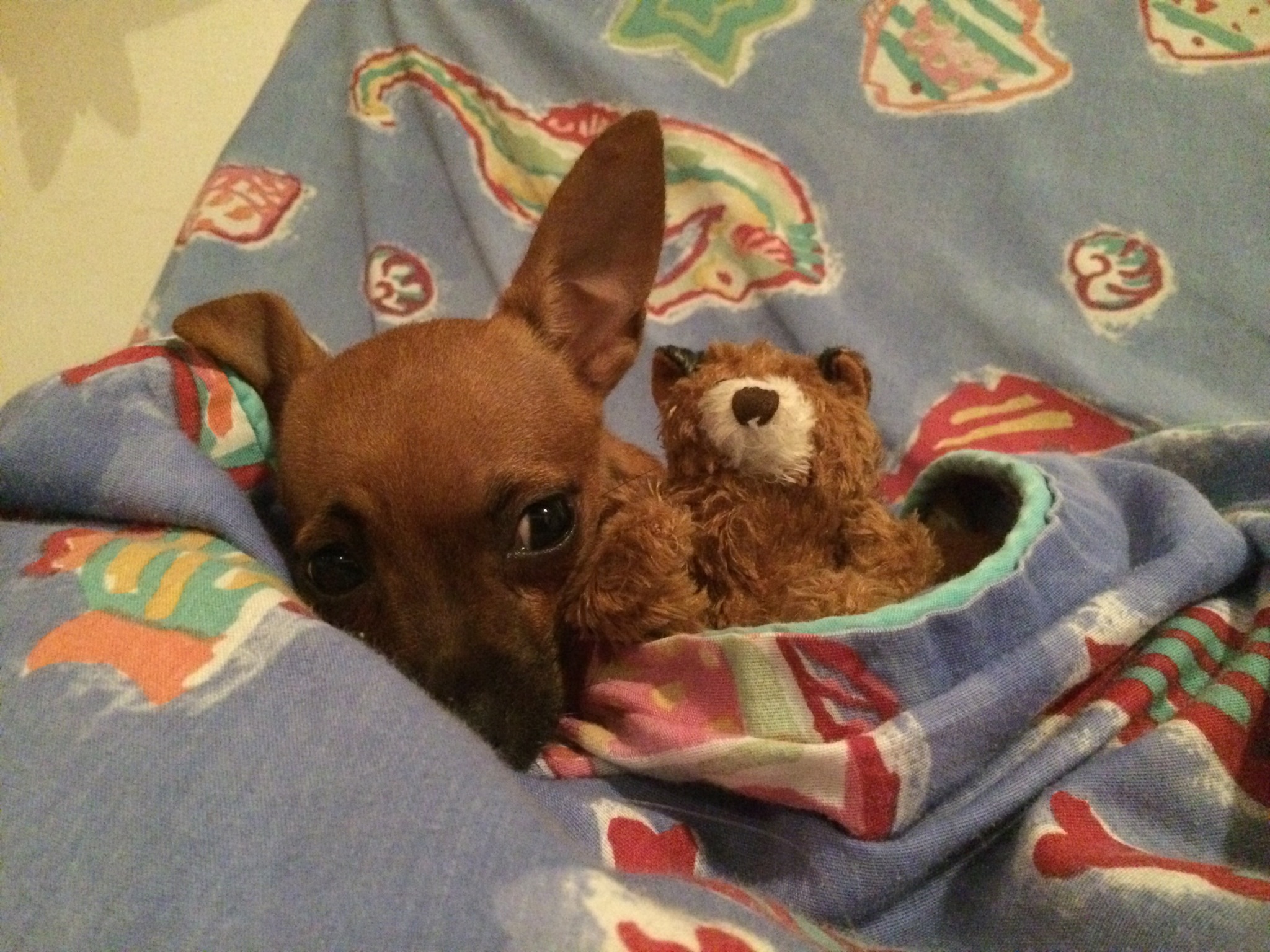 So here is a “Bienvenidos!” to Gidget! (I had to change her name…it was just weird calling out my nickname all the time) Wish me luck! 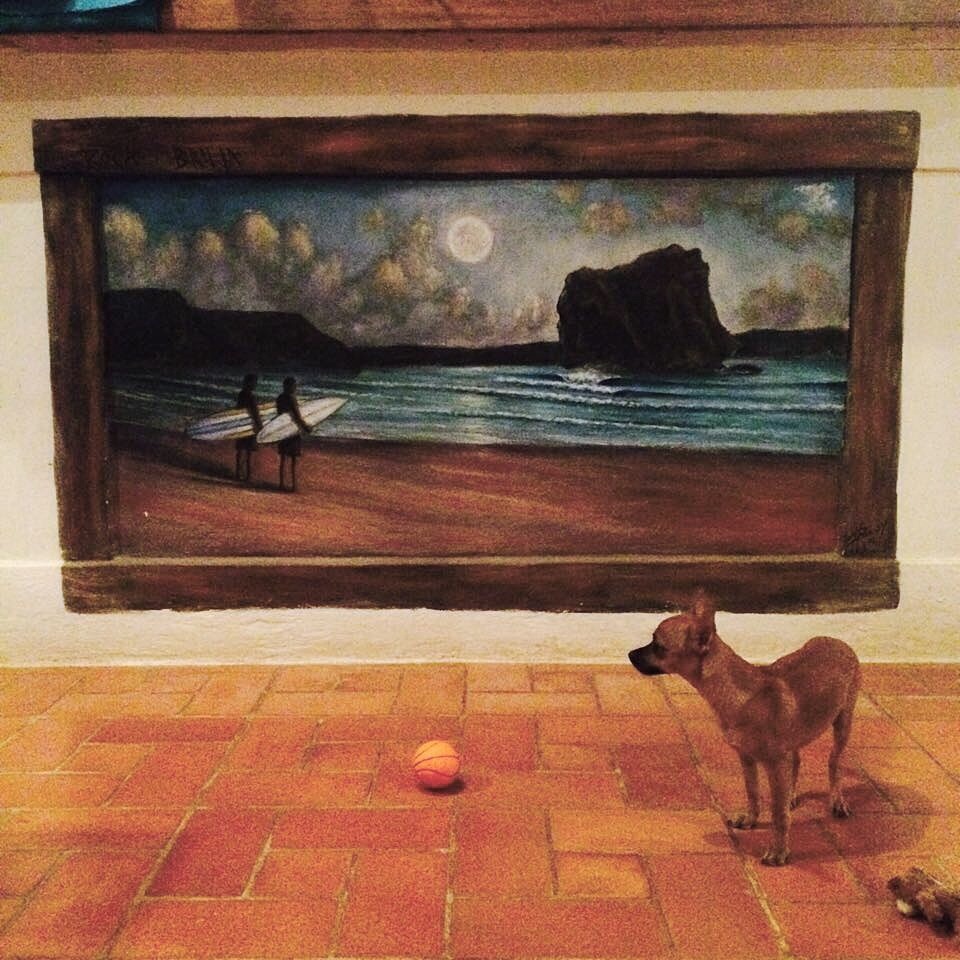