When you are as frothy as I am, the best birthday present a wahine could ask for are waves. I am talking about head-high+, offshore, barreling waves. I would much rather be surfed-out then hung over.

Just my luck, I woke up to flat and even flatter waves. So what is a chica to do when the waves are barely 2ft? Grab a longboard and head to Lola’s at Playa Avellana for a beachside lunch and a sunset surf! 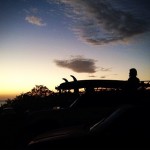 The swell that happened here in Tamarindo was magical. It is not often that Tamarindo gets a swell that produces 5-8t+ waves and the surrounding beaches to be a fraction of that. One morning of the swell, I ventured up to a secret spot overlooking Tamarindo and as far as the eye could see were corduroy lines marching straight at the rivermouth. This is what liquid dreams are made of.

You know what they say…better late then never.

P.S. Thanks to this swell, two new cards designs are on the way. Check it out!