Growing up, my mom was my alarm clock. She used to shout my name every school day morning promptly at 7:15AM and I would roll out of bed, brush my teeth, wash my face, throw on some clothes, and by 7:30AMish I was out the door to school. When I lived in NYC, I would sleep until the last possible minute, and 30 minutes later I was hopping on the subway. Don’t get me wrong…I really do enjoy the early morning, but waking up early to go surf vs. commuting to a tiny cubicle is quite the contrast.

Since moving to Costa Rica last year, my internal alarm clock has switched to ~6:15AM. My commute to work is brewing a cup of amazing Costa Rican coffee, grabbing my MacBook, and sitting on a rocking chair on the terrace by 7AM.  When the tide is right in the morning, I often awake to my cricket chiming iPhone alarm at 5:15AM. (Being the first one on the beach = having all the waves to yourself.)

Besides surf, what else could entice me to wake up before dawn? How about a night-before-planned trip to Playa Ostional to watch the “arribada” (arrival) of the mass amount of olive-ridley sea turtles to lay eggs? Let’s just say I was just a tad excited to hear the 3:45AM cricket chime wake me up. In true form, 15 minutes later I jumped in my friends car and we headed South.

A little over an hour later, we got our first glimpse of all the turtles from the road heading into Playa Ostional. It was daybreak and there were turtles up and down the beach. It was breathtaking and amazing. Mother Nature once again had me all giddy. These majestic creatures would appear out of the surf, slowly crawl their way up the beach, painstakingly dig their holes, lay about 100 eggs, then exhaustingly crawl their way back and disappear back into the waves.

I was so fascinated that as soon as I got back to Tamarindo, I had to find out more about these turtles. So pay attention, here are some interesting facts:

“The beach of Ostional is the scenery for a rarely-seen biological wonder. The week before new moon hundreds, and sometimes hundreds of thousand sea turtles come to one specific mile of beach at Ostional to dig their eggs into the black, volcanic sand.

Only olive-ridleys and their close relatives, Kemp’s Sea Turtles, synchronize their nesting in mass emergences or “arribadas”, the Spanish word for arrivals. Some days or weeks before the mass nesting, the “flotilla”, an increasing number of turtles, congregates close offshore. After some days, prompted by some secret signal, the “arribada” will begin. At first, a few hundred turtles will come out on the beach, followed by a steady stream of animals for the next three to seven days. 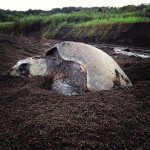 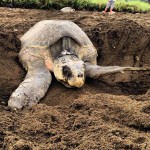 Turtles nest at Ostional year round, but peak time is during rainy season. From August through December arribadas occur regularly once, sometimes even twice a month and the number of nesting females are in the range of hundreds of thousands as opposed to tens of thousands for the dry season months.

The turtles generally ride in on the high tide at night but during an arribada they start arriving soon after sunset and keep coming until 6AM the next morning. Used to a life in the ocean, the turtles painfully drag their heavy bodies over the beach until they get over the high tide line. There, flicking clouds of sand, they dig a nest with their flippers to deposit around 80 – 100 soft-shelled, white eggs, the size of a ping pong ball.

Over the course of a five-day arribada nesting turtles will leave up to 10 million eggs on the beach of Ostional.” (Facts courtesy of NicoyaPeninsula.com)

With so many eggs, the Costa Rican government has legalized the harvesting of the sea turtle eggs for the first three days of the arribada, as the eggs would only get destroyed by the following turtles laying their eggs. In addition to humans, the ecosystem “helps” to deal with the massive amount of eggs. Vultures, other birds, iguanas, and even dogs wait for the turtles to lay their eggs and quickly break through the leathery egg shell to consume. For the eggs that make it, in about 45-54 days the baby turtles will hatch.

I would love to make another trip down to Ostional…so I will update you all on the baby sea turtle race to the ocean if I can make the trip!